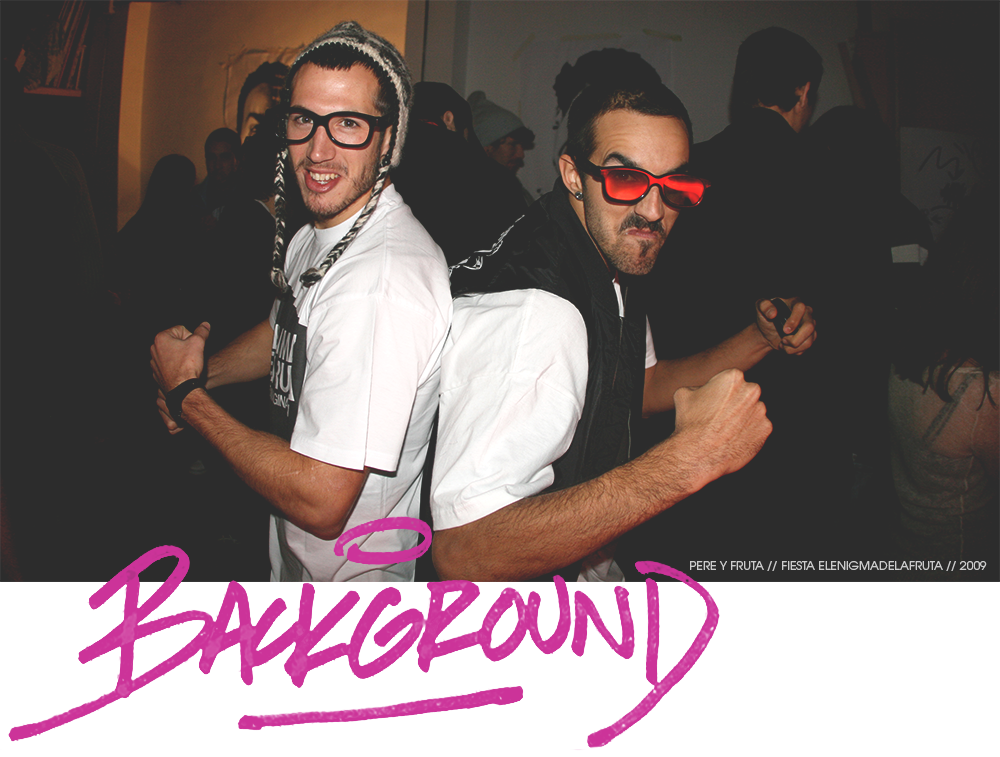 Luis Garcia “Fruta” and Pere Joseph are the main characters of this tale: Losinformals. The year was 2005 when through Athletics, they first started crossing each other at various training centers and during national championships. But what really united them was the love for “breakdance” and as they conquered the dance floors of the competition’s after-parties, their connection grew stronger: they were known to be the freshest dancers of the site. The magic started happening some years later when Pera moved to Madrid to continue his training and ended up sharing the trail with Fruta. From that moment on they started sharing more apart from the training and found out the great amount of interests they had in common.

During those times Fruta was at the peak of his studies in Fine Arts and together with his inseparable companion Emilio Rivera “Enigma” founded the collective “Elenigmadelafruta”. It is when Pera started joining them and witnessed endless nights of laughter, conversations about art, happenings and interventions, painting and putting up posters through the whole city, that they finally realized what really united them: anti conformity and rebellion against pre-established forms. They needed to make themselves be heard and wanted to goof and “be off the mark” more and more every time. Pere became part of the upgraded collective “El Enigma de la Fruta es la Pera” and this was the beginning of everything, more or less in the year 2009.

The collective served them as a research platform to give their practice a place in which art and life could interact with each other. It was born in the context of visual arts to detach from the borning and conventional appearance of contemporary art. Their starting point was humor and the “apology of silliness” used as tools to remove and awaken their environments. They used to say “Elenigamdelafruta is an attitude”

Themselves and the games they were creating were the actual pieces. They were bringing Art “from the sky to the ground” to strip it away by its elite exclusivity so that everyone could use it, touch it or conceptualize it as well. They were playing with their limits and with the risk of learning from the unknown or at least failing by trying: Creating situations and waiting for interactions to mark the way. Elenigmadelafruta was their life’s catalyst inside art and until today it is their polar star to live and create.

Since our happenings always had a performative base they brought us closer to the world of Performing Arts. After a long journey in which each member of the collective followed his own hunger for knowledge by learning about different disciplines such as contemporary dance, physical theater, music amongst others, the time came to meet again to confront our experiences: Losinformalls represents the collision between two asteroids and the praxis of Elenigmadelafruta through performing arts. It is the union and the staging of the methods, skills and statements developed during the last ten years.